My friend once told me that if she could have any dad, not having had one herself for most of her life, she would choose my dad.

He has been a perfect dad in so many ways.

The animals we (he) cared for… Rabbits, Guinea pigs, horses, dogs.

Experiences… Walking through the woods with his gundog. Making the same dog pull us on a sledge over the snowy ground. The annual walk to the ‘haunted house’ at Halloween. Caravan Holidays. Vegetable picking. Flower picking. Going with him on ‘the round’: helping him as he delivered his produce to greengrocers.

The endless conversations as we have grown up: Dad was always there to listen, advise.

How do you cope with losing someone who has been a huge part of your life for 38 years? How do you manage without that person being in your life every day?

What will my days look like? What will happen in the evening when I no longer go to sit with him, listen to him?

You cannot predict how you will grieve. For me, my grief has been a bubbling stream: constantly moving, changing, present. Then a dam burst and I can’t breathe, think… The pain feels like it will tear me in half. Then, numbness… so ice-cold that I don’t feel alive.

Dad’s only been gone five days. I still haven’t accepted it. I go into his living room and it’s like he has just stepped out for a moment. Every night, I pick up his jacket just to smell him… Pretending in my head that I’m hugging him goodnight. Am I losing it? Is this normal?

I’ve found my journal to be a good companion and a comfort. I started it five years ago when Dad was first diagnosed with lung cancer. I’ve written lots of memories; at night, when I couldn’t sleep; at his hospital bed with tears streaming and his hand in mine.

Dad’s funeral is a week tomorrow. 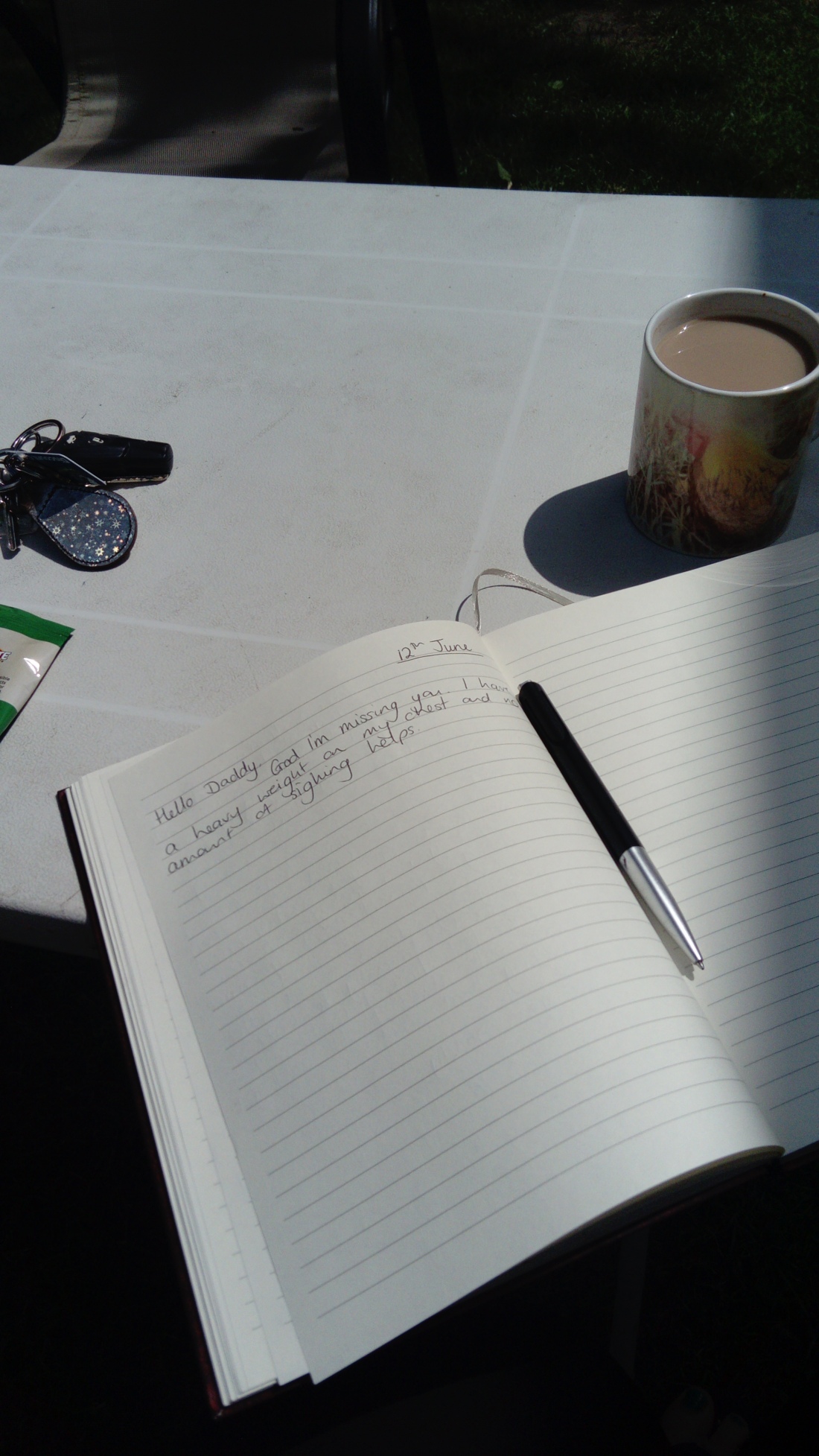 It’s nearly midnight. I’ve just come to bed to find that my 11 year old son has been on his Xbox when I thought he was asleep. He doesn’t cope very well with being caught out or being in the wrong. Quickly, he tries to push the blame on me. I have no energy or inclination to argue. Instead, I remove one of the wires and tell him that th is will now happen every night. The fact that it frustrates him says it all. I have been very naive and over trusting. Tomorrow I am going have the problem of trying to get him up in the morning so we are not late. He will be grumpy towards everyone which will then set off a row between him and his siblings.

For a fleeting moment I wonder how I am going to manage. After work I’ve been a mum and a carer to Dad. I did some urgent school work until 10.30pm, tidied a little then went to sit with Dad.

We talked about tomorrow’s visit from the respiratory nurse. Dad can’t understand why he is visiting. I tried to explain but it is pretty obvious that Dad does not realise the situation he is in. When he does seem to have an inkling, it produces a further low mood. He said that he wasn’t any good to anyone. I, of course, explained how that was not the case. I’m not sure he bought into it.

I had every intention of waiting for him to go to bed so I could accompany him. Tonight is our first night with out my sisters. However, for the last 30 minutes he has repeatedly told me to go to bed. He said I am making him feel bad. He reassured me that he can manage on his own.

I have come upstairs but, as you can see, have no intention of going to sleep yet. Writing this post is killing some time but also draining me of the little energy I have left.

How will I manage? I know things are only going to get worse. Can I really manage a full time job, three children and a sick father alone? Sure, my sisters are fantastic and are helping as much as they can but the strain and the cracks are beginning to show. They’ve bickered today: at the moment, one is grumpy and irritable the other is tearful and sensitive. Not a good mix.

I’ve just helped Dad to bed. I heard the door and came to the stairs to help. He just kept apologising over and over.

He’s got nothing to be sorry about but he doesn’t believe me.

Not long after the ambulance had pulled away, my other sister (my youngest sibling was supporting Dad in the ambulance) arrived. I quickly went over the evening’s events again. Looking at her, I could see the worry and grief of a month of Dad’s illness in her face, her eyes, her posture. I know she can see it in me too- I can see it well enough in myself.

She left soon after to get to the hospital so she could see Dad before work. I lay on the couch, exhaustion making me drowsy whilst I simultaneously waited for news and a more reasonable hour to wake my children’s dad to ask he could come over and watch them whilst I went to the hospital.

I was in the hospital by 8.30am. Compared to the other three times Dad has been taken by ambulance this month, he looked reasonably well. Before long he was taken to an assessment ward while we waited for repeated bloodtests to show whether he had had another heart attack.

Dad was very grateful and apologetic for us staying with him, and for all our support. We kept telling him that we wouldn’t have it any other way: Dad is there for us no matter what the problem.

My sister and I told Dad about the various friends we had who had said how much they love our Dad. One friend of my once said:

“I’ve never really had a Dad. But if I could picture what I’d want in a Dad, it would be yours.” Praise indeed and well deserved.

He’s stubborn and a little old fashioned. He’s stuck in his ways. He still treats me like a teenager if I come home later than he thinks I should. He gives me advice whether I want it or not. He is usually right.

I honestly don’t know how long I have with Dad. Part of me is fighting desperately to make the final stage of his life a happy one, but I don’t know how. Other than to show him and tell him I love him every single day… It just doesn’t seem enough.

He was alert this morning. His face still showed that grey palour of sickness but there was a pink tinge to his cheeks that had been absent for so long.

Within seconds though, it was evident that the confusion that descends every time my dad is hospitalised had arrived.

Hours later and the alertness has diminished and the confusion increased. He has now been prescribed medicines to help but history has shown us that these take some time to work.

“We can’t give you tobacco dad.”

Yesterday we were here from 8am til 4pm and then we returned in the evening. The grim reality of the situation is never far from our minds despite the slight improvement last night and this morning.

The Non Invasive Ventilator (NIV) we have been told is keep him alive is doing its job. His carbon dioxide levels have improved. This morning though we have been told dad has refused to have it on – no doubt fueled by his increasing confusion. As the day wore on, it was clear to us that he was deteriorating again.

The mask has just been put back on.

It’s hard to process this roller-coaster of emotions and feelings. Hope to despair to laughter (fuelled by dad’s jokes when alert) to fear when his chest wheezes and his face pales.

It’s hard to see him suffer. It’s hard to think that he may still not make it. He has a ‘do not resuscitate’ order in place. He is not eligible for Life Support. And I really don’t want him to suffer. Then I feel bad because then it sounds like I want him to die. I want him to live in comfort. I want him to be happy. And I don’t think that is going to be possible, even if he survives this time.

I’ve taken to noting things down. Like how he told us yesterday that we were “the best four daughters [he] could ever wish for” before the confusion set in. Or the winks he gave me when he saw the tears I was desperately trying to hide.

The clock is ticking. We’ve been told that he can have the NIV for a maximum of four days. If his lungs haven’t sufficiently recovered by then we would need to consider end of life care. I get the impression that this would not take long. Without the NIV, we’ve been told his organs would begin to shut down.

Why am I writing this down? Why am I telling you all this?

If this is the end of my wonderful dad’s life, I want to remember it. All of it – the painful bits too. Because this is all I might have. These last days and hours might be it.

We picked up a booklet today on ‘Coping with the final stages of a long-term lung condition’. It is hard to read but really helpful and informative. Reading it, I realised that Dad is showing many signs that he could be at the end. Even if he survives this time.

When he survived the lung cancer four years ago, and the prostate cancer only recently (the cancer is being controlled by drugs meaning that it is not life threatening at present) I thought this could mean, if I was really, really lucky, that I had another ten years with him. He has older siblings that are still alive and one that lived til she was 90. I didn’t think about the others that have all died under 70.

For however long he is here, be it hours, days, months or years, I will cherish him. The best dad I could ever wish for.